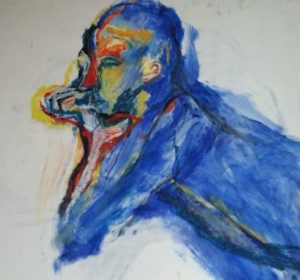 Francesca Sharkey has exhibited regularly in London over the past decade(s).  After graduating from Plymouth University (Exeter Faculty of Art and Design) in 1993 with a BA Hons in Fine Art, she spent 3 years in Paris, where she designed theatre sets for an opera company. She started painting dogs in 2017.

‘…displays a body of work which is both contemporary in feel while at the same time having something timeless about it. This timelessness is apparent due to the sometimes theatrical, almost stage-set quality of the compositions, and the vibrant use of contrasting colours… One painting which highlights very successfully this ambiguity in time and place is ‘Trafalgar Square’. At first sight I was led to consider whether the figures are simply ordinary people out on the street, or performing on a stage.

The subject matter of these paintings, primarily involving people in social situations, is lifted out of the ordinary or banal by Francesca’s intense use of colour and dramatic use of perspective: apparent in ‘Elvis Night’ where one man’s upper body and face looms in the foreground, creating a sense of drama and intrigue.

Each painting is very painterly in style…. capturing the intimacy, secrets, laughter – the inner thoughts of her characters. Each scene is expressive due to her choice of contrasting colour combinations, and her intense use of brushstroke, so much so that the atmosphere in each painting is almost tangible. Most specifically, I was struck by the sense of dramatic intrigue, achieved by the fascinating juxtaposition between the often open air of celebration and the sometimes darker sense of mystery.…overall, a very interesting and uplifting body of work.’

‘Most striking! The use of colour especially is overwhelmingly intuitive and subtle. Light seems to dance, almost, on subjects that emit mystery and pathos.

The canvases draw one in, magnetically whilst these pictures never seem to

Theme by Anders Norén — Up ↑